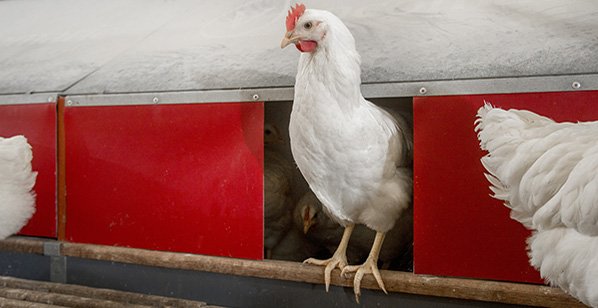 An egg a day – oviposition explained

How are our hens so productive?

More than a decade ago, we committed ourselves to developing laying hens that are able to produce 500 eggs per hen in 100 weeks of age. All over the globe we can clearly see a trend that egg producers are keeping their birds in production longer with every new generation of laying hens that we place in the market.

Although it seems pretty logical that we expect a bird to lay an egg per day, the processes behind egg production are not that simple. Have you ever wondered about the biological processes behind the formation of this superfood?

Producing an egg a day would not be possible without continuous ovulation. A female, day-old chick has more than 10.000 oocytes present in the left side of her ovary as the right side of the ovary already stops developing during the embryonic phase. Less than 10% of these oocytes will later in life accumulate yolk and grow out to an ovarian follicle.

The rate of follicle development, and therefore egg production, is highly efficient in commercial laying hens. When you look at the ovary of a sexual matured hen, it looks like a bunch a of white and yellow grapes in all different sizes. The first development of an oocyte into a white follicle can take several months into account. Once the follicle reaches a size of 6 mm or more, yellow yolk accumulates massively and rapidly: over the course of 6 to 12 days it can reach a diameter of more than 30 mm! The yolk is completed 24 hours prior to ovulation. The follicles reach ovulation in the order of which they embarked this process of rapid growth; this order is also known as the ’follicle sequence’. Within 1 hour after a hen has produced an egg (oviposition), the next mature follicle ovulates. In today’s commercial laying hens, the ovulation cycle takes a total of around twenty-four hours, resulting in birds that can produce an egg a day. In most of the ornamental birds, the ovulation cycle takes over 25 hours.

Ovulation is known as the process in which the yolk (ripe oocyte) is released from its follicle in the ovary and is received into the oviduct through its infundibulum. The infundibulum is the place where the fertilization could take place as it is the storage place for the spermatozoa.

After the infundibulum, the ovum moves further along the oviduct via the magnum. The magnum is the longest part of the oviduct. Most of the albumen formation takes place in the magnum, this process lasts about 3 to 4 hours. The chalazae and albumen form around the yolk mass as it is propelled in a rotating motion by rhythmic peristalsis, resulting in the characteristic structure of the chalazae. The chalazae are made up of protein fibers which connect the yolk with the shell membrane, ensuring the central position of the yolk.

After the magnus, the egg mass arrives in the Isthmus, this is where both the inner and outer shell membranes are formed. These membranes are closely spaced in most parts of the egg, but at the blunt side of the egg, they segregate to form the air chamber. Egg white cannot go through the membranes, but it does allow the exchange of gasses and minerals. By the time that the egg mass gets to the end of the isthmus, the first calcium salts have already been deposited onto the outer membrane. After the isthmus, the egg arrives in the uterus, also referred to as the shell gland.

The eggshell is formed in the uterus over a period of 19 to 20 hours by the secretion of an organic matrix of glycoproteins and mucopolysaccharides of the uterine wall. This process of calcification requires around 2 to 2.5 grams of calcium per egg. Around 2/3rd of the calcium required for the eggshell formation is absorbed from the intestine during the 20 hours of shell formation. The remaining 1/3rd of the calcium required is mobilized from the bone, and especially the medullary bone as the mobilization of the medullary bone is 10-times faster than that of cortical bone. The calcium that has been mobilized from the bone will be replenished as soon as the uterus is empty again. During this time period, the calcium, absorbed from the gut, is fully available for the formation of bone matrix.

At the end of the shell formation, the color pigments (mainly protoporhyrin IX) are added to the shell to give it their distinctive colors. The final step prior to the actual oviposition is the deposition of the cuticula, a waxy membrane composed of polysaccharides, lipids and over 50 proteins! The primary function of the cuticula is to prevent the penetration of microbes into the egg and to limit the evaporation of water from the egg. The oviposition, e.g. the actual deposition of the egg, is regulated by several hormones (oxytocin, arginine-vasotocin and prostaglandines). This hormone surge causes the fully formed egg to go through a 180-degree rotation. It is this rotation that causes the egg to be pushed into the vagina. In the vagina, mucus is secreted to smoothen the final oviposition. The release of the egg through the vagina, and finally the cloaca, lasts, on average, less than 1 minute! Within 60 minutes after the oviposition, the next ovulation will already take place, and the aforementioned process will repeat itself over again!

As 2019 draws to a close and we enter a new decade in 2020, we’d like to reflect on past accomplishments and plans for the new year. Throughout another busy year, it has been an honor and a pleasur...

We’re pleased to highlight another successful flock that has surpassed 500 eggs per hen housed. Schothorst Feed Research is an independent research organization, based in the Netherlands, that deve...

What is Egg Quality

As a result of the large diversity in the potential uses of eggs and the subsequent demands of the consumer, it is quite a challenge to define egg quality according to everyone’s standard.