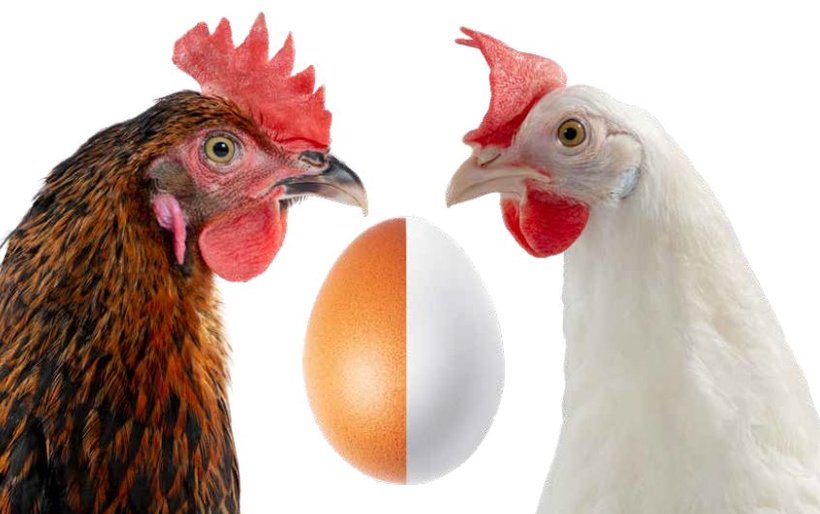 What does the earlobe tell you about egg shell color?

Chickens do have ears, although they are hidden by fine feathers on the side of their head. The fine feathers are there to protect the ears. There are no outer ears, such as most mammals have, but what can be clearly seen are the earlobes. The earlobe is often a small flap of skin under the ear canal. For most breeds, the earlobes are much more present in roosters compared to hens. Earlobes tend to grow larger when the bird age. sometimes they can be so large that they can be mistaken with the chicken wattles.

Chicken earlobes can come in different colors, dark red, pearl white, yellow, pink, peach and even blueish or purple. In general, for most commercial breeds that are available the color of the earlobe will reveal the color of the egg: our white egg layers have white earlobes, where our brown egg layers have red earlobes. For the tinted egg layers (a cross between a white and brown egg layer, the color of the earlobe is more pinkish, or red with a white spot in the middle). But what is true for most commercially available egg layers, does not perse account for the ornamental backyard breeds, as clear exceptions in this relationship are known.

Although the earlobe is one of the conspicuous furnishings of the head of the chicken, we find little mention of it in genetic literature. Dr. Warren has made numerous crosses involving differences in earlobe color but practically no real correlations have been found on the inheritance patterns of its color variations. The variability in ear lobe color of the progeny in the F1 generation and the complex nature of its factorial basis have probably been the conditions which have discouraged the undertaking of in-depth genetic investigations of this character. Dr Warren found that breeds having the same earlobe color may differ considerably in their genetic constitution with respect to this character, individuals of a single breed and strain may differ in some of the minor genetic determiners. Variation in chicken earlobe color may be caused by ancestral lineages and mutations, as well as the adaptability to local conditions. For example, the presence of white earlobes is due to purine base deposition and the formation of other color earlobe is attributed to the mixture of different pigments including melanin or carotenoid. The red earlobe could reflect the health of the birds with the degree of redness. In recent years, more research has been done to investigate the genetic composition of earlobe color, a study by Nie et al (2016) revealed the white/red earlobe trait is polygenic and sex-lined in Rhode Island Red chicken populations.

As both the earlobe and eggshell color are polygenic traits, and not all genes are located on the same chromosome, the direct genetic relationship (genetic linkage) and inheritance between earlobe color and eggshell color is not present. Therefor we must conclude that the widespread belief that all hens with red earlobes produce brown eggs, and hens with white earlobes produce white eggs is not the absolute rule. Today’s earlobe characteristics are mostly the result of many generations of selective breeding for a specific look. This relationship between eggshell color and earlobes does occur in our commercial breeds, but as mentioned before, it is not the result of a genetic correlation between these 2 traits, but a result of defining the breed characteristics more than a century ago.